John Cadbury, the founder of the Cadbury business, was from a Quaker family. He opened a grocer’s shop at 93 Bull Street, Birmingham in 1824, selling cocoa and drinking chocolate amongst other things, which he prepared himself using a pestle and mortar. Tea, coffee, cocoa and drinking chocolate were seen as healthy alternatives to alcohol, which as a Quaker he believed was bad for society. 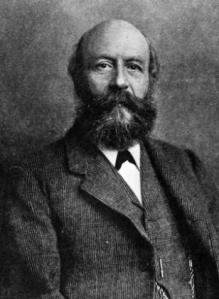 Partnering with his brother Benjamin Cadbury, Cadbury brothers was formed in 1847. Then in 1969, Cadbury merged with drinks company Schweppes to form Cadbury Schweppes. They went on to acquire more beverages companies in the US, for example Sunkist, Canada Dry, and Typhoon Tea. In 2007, with the changing business environment, Cadbury Schweppes started to diversify and split it business into two separate entities: one focusing on its main chocolate and confectionary market; the other on its drinks business.

Kraft acquired Cadbury to expand its snacks and confectionary business in early 2010. The acquisition assumes importance considering the fact that Cadbury had significant presence in emerging Asian markets, where Kraft had minimal market base. Further, the combination of Kraft and Cadbury is expected to provide potential revenue synergies in distribution, marketing and product development.

Cocoa in the 1880s was rather different to what we know now – over 50% fat – so it was not easy for consumers to digest. By the time John Cadbury’s sons George and Richard took over the business, they got hold of a new, patented hand-operated hydraulic press which they then go on to launch a new product: Cadbury Cocoa Essence.

Cadbury’s own milk chocolate bar, made by adding milk powder paste to the dark chocolate recipe of cocoa mass, cocoa butter and sugar, was launched in 1897. But it did not attract a lot of interest.Swiss manufacturers were leading the field in milk chocolate, with much better products than their rivals. So in 1904 George Cadbury was tasked with developing a milk chocolate bar that was to have more milk than anything else on the market.

‘All sorts of names were suggested: Highland Milk, Jersey and Dairy Maid. But when a customer’s daughter suggested Dairy Milk, the name stuck.’ George Cadbury

Dairy Milk was launched in June 1905. It was sold in unwrapped blocks that could be broken down into penny bars. Gradually it became more and more successful – Cadbury’s biggest seller by the beginning of the First World War. And by the early 1920s it had taken over the UK market. And of course, it’s still with us today. Cadbury Dairy Milk has become a megabrand, available in many different varieties and all over the world. 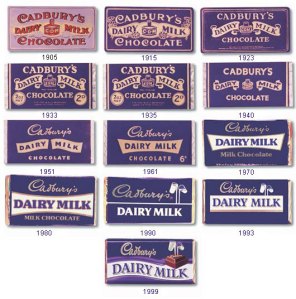 Chocolate for eating appeared in the 1840s and had decorative packaging right from the start. It was a new product so it had to tempt customers who may not have tried it before. Two of the earliest pictorial labels were based on engravings of Queen Victoria and Prince Albert, and of Birmingham Town Hall.

Richard Cadbury designed the first chocolate box and it was decorated with a painting of his young daughter Jessica holding a kitten. Richard liked to use his own children as models, or painted flowers and scenes from holidays. With his creative talent put into excellent use, the decorated boxes were highly demanded and popular, helping the growth of both the Cadbury business and the confectionery trade in general 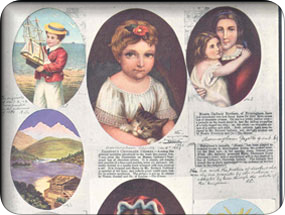 In 1905 William Cadbury commissioned the first proper Cadbury logo. He was in Paris and chose Georges Auriol, who also designed the signs for the Paris Metro, to create the design. It was a stylized cocoa tree interwoven with the Cadbury name. Registered in 1911 it was used on presentation boxes, catalogues, tableware and promotional items, and imprinted onto the aluminium foil that was used to wrap moulded chocolate bars. It might not be something we’d recognize today but it was used consistently from 1911-1939 and again after the Second World War.

Cadbury first used the house colours of purple and gold at the turn of the century, and Milk Tray was purple at launch in 1915. Cadbury Dairy Milk however started out in pale mauve with red script, in a continental style ‘parcel wrap’ at its launch in 1905. The full Dairy Milk range became purple and gold in 1920.

The Cadbury script logo, based on the signature of William Cadbury, appeared first on the transport fleet in 1921. It was quite fussy to start with and has been simplified over the years. It wasn’t until 1952 that it was used across major brands.

Then we have the  “Glass and Half Full” symbol which was originally used in 1928 on press and posters, but since then it’s been in TV ads and on wrapper designs, where you can still see it to this day. First of all it was just on Cadbury Dairy Milk, but it’s become the face of the company in recent years. 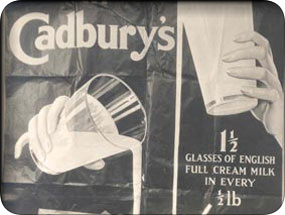 In 1985 when Dominic Cadbury became Chief Executive of Cadbury Schweppes it was decided that the Cadbury name should only appear on products that involved chocolate or cocoa, and a consistent logo was designed to appear across all of them. Complete consistency on all elements of packaging design was achieved in 2003.

Right from the beginning when he opened his shop in Bull Street, Birmingham, John Cadbury had a flare for advertising. His first ad in the Birmingham Gazette on 1st March 1824 presents his new sideline succinctly (by 19th century standards).

‘John Cadbury is desirous of introducing to particular notice “Cocoa Nibs” , prepared by himself, an article affording a most nutritious beverage for breakfast.’

He had an eye for promotion, and his shop with its expensive plate glass window, instead of the usual ‘bottle glass’ panes, got lots of attention. He even employed a Chinese man to serve in the shop wearing full national costume, which would have been a huge novelty at the time. When Cadbury launched Cadbury Cocoa Essence, its advertising  stressed how pure the product was and used medical testimonials:

‘We have carefully examined the samples brought under our notice and find that they are genuine, and that the Essence of cocoa is just what it is declared to be by Messrs. CADBURY Brothers.’ – Lancet

‘Cocoa treated thus will, we expect, prove to be one of the most nutritious, digestible and restorative of drinks’ – British Medical Journal

All these thoughts were marvellously summed up in one slogan ‘Absolutely Pure, therefore Best’ which became a thirty-year advertising campaign.

After the First World War, Cadbury invested more into their Visitor’s Department with hugely popular scheduled railway excursions. A staggering 150,000 people were taking the tour by 1938; Cadbury believed it was essential, giving people a lasting link to the business and its products. Rising volumes and falling transport costs meant that the prices of Cadbury products dropped significantly in the 20s and 30s.Cadbury passed these savings on to the customer, seeing no problem in offering a high-quality product at a good-value price.

Cadbury ploughed investment into advertising, stressing its high milk content. From 1928 a series of poster campaigns using the iconic ‘glass and a half’ measure of milk established Cadbury Dairy Milk as one of the first truly recognisable brands on the high street. The ‘glass and a half’s simple message of food value combined with enjoyable eating has found its way on to TV ads and wrappers. And it’s still there today – becoming synonymous with Cadbury Dairy Milk worldwide.

In 1988 Cadbury began planning a visitor attraction to take the place of the factory tours – Cadbury World. It cost £6 million to build, but was worth the expense. In 1990 Cadbury World opened in Bournville on a site next to the Cadbury factory and headquarters, attracting 350,000 visitors in its first year – 100,000 more than were expected.

With the decreasing impact of TV advertising, Cadbury begins to switch to digital advertising as a channel to engage its consumers. The digital channels like the Internet have one crucial advantage: Interactive; therefore users can post comments, vote, enter competitions, play games and even make their own films. With this strategy in mind, Cadbury produced two online videos that went viral in the Internet: The Gorilla and the Eyebrows